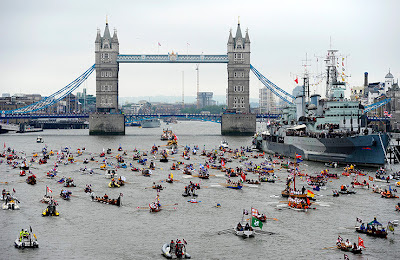 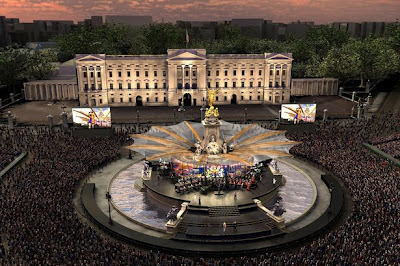 The celebrations are still going on here in cold and wet UK. Having a great 4 day weekend. I am truly excited to be apart and witness a special historical event such as this.

The weekend kicked off with me and my boyfriend watching the special programmes from the BBC, with Prince Charles watching old home movies of his childhood. Was a touching programme. It was nice to see the Queen being relaxed and herself. We put the Royal Family up on a pedestal and it was great to see them being normal. They are human after all.

The next day me and the boyfriends family had a jubilee lunch watching old footage of the Coronation. The Queen looked beautiful. We ate a cold lunch, expecting the weekend to be as warm as previous weekend. How wrong were we!? Either way the lunch the yummy. We had fillet of beef sliced, coronation chicken and various salads. (And a bit of wine.) The room was decorated with bunting.

Then the day after we watched the Flotilla. Was amazing! I have never seen so much activity like that on the River before and I don't think I will see a sight like that ever again. Every kind of boat was in the Flotilla, but I personally preferred the smaller row boats. Unfortunately the weather didn't hold and it did become a wash out. I must admit, towards the end I did find the whole thing a bit tedious. The BBC did well broadcasting it in general; they did have a few technical difficulties - also they kept changing the camera to focus on what was also going on around London. I didn't want or care to know about that - I just wanted to see the Flotilla. If I wanted to know what was happening in Battersea Park I would of gone myself.

The Queen did very well, she stood the whole time in the cold and rain. Well done her Majesty!
Sadly Prince Philip took ill, but apparently it isn't serious. Get well soon!

On the day of the Jubilee Concert me and my boyfriend got up early to go and watch 'Prometheus' in 3D at Putney Odeon.  Was a good film. We then went and had a late lunch with his brother, sister in law and niece. More wine was drunk.

The Jubilee Concert was amazing. The staging and lighting was superb. And the sun came out! The Royal Family looked like they enjoyed the concert very much. There were a few surprise acts. I certainly wasn't expecting Grace Jones to perform and do a bout of hoola hooping at the same time.

Gary Barlow and Andrew Lloyd Webber did a fantastic job of the official Jubilee Song, 'Sing.'

Cheryl Cole sounded like a dying cat. She was in my opinion the one and only bad act of the night.

I am currently watching the Thanks Giving event at Westminster and St Pauls on the BBC. Looking forward to the flyby.

As a sum up, I really enjoyed the past few days. I am privileged to witness a historical event and I am very proud to be British. Well done and God save the Queen!